During the summer, I watched a new Disney movie called Raya and the Last Dragon as a Saturday night activity. Lately, Disney movies have caught my attention; previously, I wrote an article on the movie “Soul”, which I thought was an insightful story. Besides the great action scenes filled with combat, the colorful sceneries, and the cast crowded with well-known celebrities such as Awkwafina, Kelly Marie Tran, and Sandra Oh, I am most interested in the themes of the movie, which are revealed by the plot of Raya and the Last Dragon. And although Raya and Last Dragon is a princess movie, I sense that it contains a meaningful message; one that is particularly relevant in our present times. It is about mutual hope and trust.

Once in Kumandra, a large region shaped like a dragon situated in South Asia, people lived harmoniously alongside dragons, creatures that brought humans water, rain, and peace. Then, five hundred years ago, the Druun, a plague born from human disagreement, rose in power and threatened people’s lives. The Druun turns whoever it touches into stone. The dragons tried to fight back, until they were, too, turned into stone. Before all the dragons turned into stone, five of them reunited their powers into a gem and, Sisudatu, the last dragon, used it to eradicate all the Druun. Everyone that was stone came back to life, except the dragons. When all the people came back, they fought each other for the gem. Kumandra got separated into five lands and the gem was then hidden away in the land of Heart. The other four lands are called Tail, Talon, Spine, and Fang; each named after a part of the dragon.

Heart’s highest chief is Chief Benja (played by Daniel Dae Kim), and his daughter is Princess Raya (performed by Kelly Marie Tran). Chief Benja organizes a reunion between all five lands because he thinks if people of different lands do not learn to trust each other again, each land will fight others until the end. “This isn’t the world I want you to live in,” says Chief Benja. In the end, he believes they can be Kumandra again.

When the chiefs of all five lands reunite in Heart, Raya makes the acquaintance of Princess Namaari (played by Gemma Chan), the daughter of Chief Virana from Fang (Sandra Oh). Namaari loves dragons and dragon legends, just like Raya, and she, as a gift, gives a Sisudatu jewelry piece to Raya. Namaari also tells Raya that according to Fand legends, Sisudatu is still alive. Raya decides to trust Namaari and brings her to the location where the Dragon Gem lies. Namaari calls upon Fang’s army to attempt to take the gem, and through chaos, all five chiefs and their soldiers are swarmed in the cave. Someone shoots at Raya’s father as he attempts to make a peaceful speech. Everyone then goes for the gem and through all the grappling, the gem breaks, and the Druun’s power starts to reignite. While trying to escape, each chief gets hold of a piece of Dragon Gem. Because he is hurt, Raya’s father gives the piece to Raya and pushes her into a river, where the Druun cannot reach because it is repelled by water. Raya’s father is then turned to stone.

The story fast-forwards to six years later, when Raya is trying to find Sisudatu in the land of Tail to bring people, especially her father, back with a newly fabricated gem. Accompanied by Tuk Tuk, her pet who, conveniently, also serves her as a means of transportation, she finally finds Sisudatu (enacted by Awkwafina) in a cave. When Raya finds out that Sisu does not have the power of making another gem, they plan to gather all five pieces of the Dragon Gem to again eliminate the Druun. When finding Tail’s piece of gem, they meet Namaari, who has now become a somewhat dictatorial leader and who has been on the hunt for Raya.

After escaping Namaari’s troop and continuing their dragon gem hunt, Raya and Sisu meet Boun, a young boy and owner of a ship, Noi, a very cute con-baby, and Tong. All these characters lost family members to the Druun. In the land of Spine, Namaari’s troops catch up and Raya tries to stall them while her friends can leave. However, Namaari beats Raya badly and Sisu appears in front of everyone and comes to the rescue. Namaari is very shocked by the sight of Sisu. When Raya’s team approach Fang, the last place to collect a part of the gem, Sisu advises Raya on the importance of hopefulness and trust in people, including Namaari, who has betrayed her deeply in the past. When Raya decides to take Sisu’s advice and take the first step towards building a trusting relationship with Namaari again, she sends her the Sisu jewelry piece that Namaari gave her a long time ago. When Namaari gets it, she decides to meet with Raya. When Namaari seems about to give them the last gem piece, Namaari takes out her weapon and orders Raya to give her all the pieces of the gem and Sisu. Sisu tries to talk to Namaari, who is still holding up her crossbow. Raya thinks Namaari will shoot Sisu, so she uses her extendable blade to jerk the arrow away, but amidst the confusion, the arrow shoots Sisu and she falls into the river. At that moment, the rivers and water start disappearing everywhere, which makes people much more vulnerable to the Druun.

Raya, filled with hatred and blinded by it, confronts Namaari in battle. Just when Raya is about to kill Namaari, Namaari blames Raya for not trusting Sisu enough and says that she is to blame for Sisu’s death just as much as she is. Raya wakes up from her rage-filled state and finally realizes that the key to ending the Druun is not dragon magic, but trust. When her friends are not convinced to trust Namaari and are stuck in believing that she is their enemy, Raya steps forward, gives her piece of gem to Namaari, and turns to stone to demonstrate her sincerity. Because of this act, Boun, Noi, and Tong follow her lead and turn into stone. Namaari is left alone, sees an opportunity of running away and leaving Raya and her clan, but she instead pieces the gem together and turns to stone too. The stone’s light fades away at first, but then it brightens. The magic erases the Druun and brings everyone in stone back, including the dragons. The water returns to the rivers. Kumandra is once again restored as the five lands reconcile.

The theme of trust is portrayed through the characters’ development. Throughout the movie, Raya demonstrates having trust issues, which she justifies with how her father blindly trusted others. Although the character of Raya is strong, confident, and intelligent, she lacks the glow of trust and hope, which keeps her from truly connecting with other people. The hopefulness in people is the exact element that will push people to trust each other, even after terrible events, and it is what Raya’s father embodied. On the other hand, Sisu believes in the inner good of people and continues to believe even when she gets hurt. When Raya says that people cannot trust each other because the world is broken, Sisu says “Or maybe the world is broken because you don’t trust anyone.” However, Sisu’s character is sometimes overly optimistic, to a childish degree. She learns to be more careful when meeting strangers on other lands but keeps her fundamentally hopeful personality.

The end of the movie demonstrates one key element about its key message, and it is this: when the world is on the verge of chaos and destruction, the best thing to do is not to stand firm and point out what others have done wrong, but to reunite as a large community, as humans of the world, work hard towards a common goal, and to hope for the better.

This message is relevant at this moment in history, regarding our planet and its inhabitants’ future situation. The graphic novel Light in Dark Times: The Human Search for Meaning, written by Alisse Waterston and illustrated by Charlotte Corden, tries to bring the same message to readers. Prof. Waterston is a professor of Anthropology at John Jay College of Criminal Justice. In the novel, she qualifies present times as “dark times”: a period where societies are filled with social problems such as inequality and oppression. She believes that the study of anthropology helps to understand the human experience and can bring forth light where there is darkness. And as Waterston, Corden, and Raya and The Last Dragon illustrated, we must use our collective force, not individual forces, to do so. From climate change, to deeply rooted racial discrimination, and what seems like politics in North America becoming more and more authoritarian, local and world news have covered more than enough issues for us, humans, to solve. Activists and demonstrators are parading through streets to denounce social injustices that the less powerful suffer daily. But while they and the people on social media are commenting, posting, and sharing important messages, it is essential to keep in mind the very reason why we started caring about these topics. It is to make a better future for humanity. In the end, it is not about blaming the rich and powerful for their faults, nor about judging your neighbor for not recycling things properly; it is about bringing more people into the light of knowledge and truth and unify people on how problems are going to be solved. 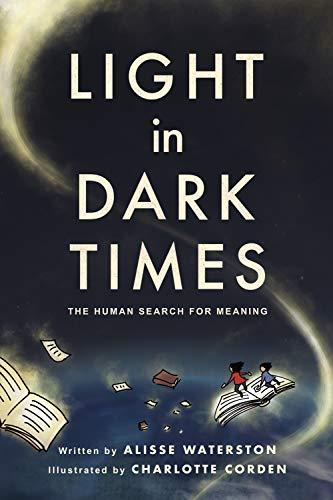 Lastly, here is a quote about hope by Václav Havel. It was included in the introduction of Light in Dark Times:

“Hope is definitely not the same thing as optimism. It is not the conviction that something will turn out well, but the certainty that something makes sense, regardless of how it turns out… [Hope can give us] the strength to live, and continually try new things, even in conditions that seem as holes as ours do, here and now.